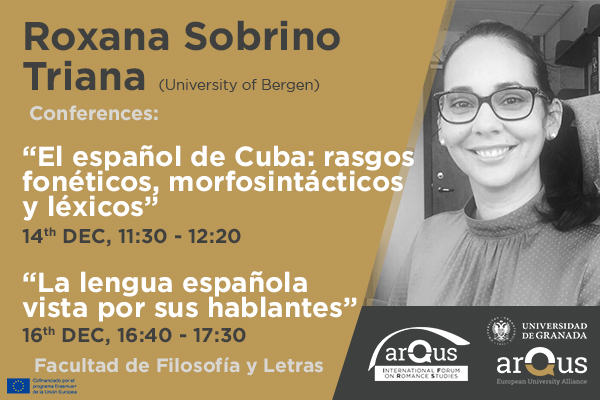 On 14th and 16th December, Roxana Sobrino, professor in the Department of Foreign Languages at the University of Bergen, will be giving two lectures to the students of the University of Granada (UGR) in the framework of the Arqus International Forum on Romance Studies (AIRFRS).

Roxana Sobrino, invited by the Department of Philology: Romance, Italian, Galician-Portuguese and Catalan of the UGR, will present the following conferences:

The Cuban variant of the Spanish language is part of the Caribbean dialectal zone and shares phonetic, morphosyntactic and lexical features with its neighbours. However, the historical, political, economic and social context of Cuba in recent decades has given its Spanish language certain peculiarities that distinguish it from other Antillean and Caribbean varieties. In this lecture, the Cuban variant of Spanish will be characterised with an emphasis on these distinctive features.

Studies on the linguistic attitudes and perceptions of Spanish speakers have been booming in recent years throughout the Hispanic world. Among these studies, the pan-Hispanic project Linguistic Identity and Attitudes in Spanish-speaking Latin America (LIAS project), led by the University of Bergen, Norway, stands out. This talk will deal with some of the main results obtained in the LIAS project, based on the analysis of 8000 questionnaires applied in all the capitals of Latin America and Spain. The data collected in this study have allowed us to reach conclusions about the way in which the different national varieties of Spanish are perceived, the attitudes of speakers towards them based on the construction of certain stereotypes and, in general, the perceptual mechanisms that are activated when associating a variety of Spanish with linguistic correctness, incorrectness or pleasantness.

Currently, the AIFRS group is also developing the second edition of the Colloquium on Romance Linguistics, organised by the University of Graz.