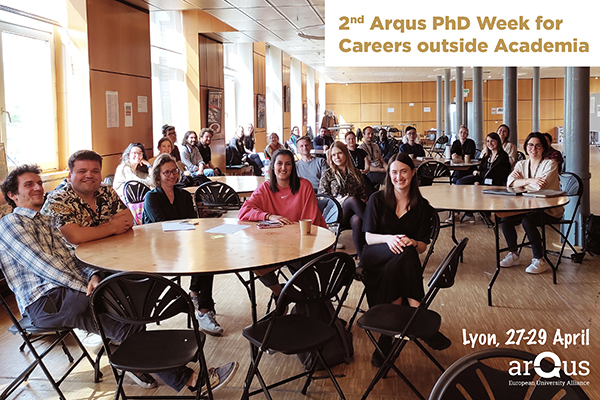 A look back at the Arqus PhD Week for Careers Outside Academia in Lyon!

During the last week of April, the 2nd edition of the Arqus PhD Week for Careers Outside Academia took place at the Université Jean Moulin Lyon 3.

Led by facilitators, 24 doctoral researchers, PhD graduates and 7 career development experts from the different universities of the Arqus Alliance worked together over 3 days.

The feedback received shows that the Lyon Career Week 2022 was a fruitful event for PhD candidates and post-docs as well as for the career development experts. Particularly successful were the group dynamic, the disciplinary diversity, the networking dimension and the exchanges with entrepreneurs who frequently hire PhDs.

In an anonymous survey, a PhD student wrote, for example: “It was perfectly structured. We never had a minute lost and I never felt bored, thanks to your interactive activities. The first roundtable and the workshops about presenting ourselves were particularly useful to me. I also particularly enjoyed the touristic tour around Lyon, great idea and great quality of the guide. Overall then, the event was a perfect fit for all of us and it has created a really stimulating environment composed of peers with the same interests and visions”.

Such feedbacks show that creating these opportunities for students is genuinely helpful and that the Alliance is fulfilling its missions.

Not only was this event very interesting for the PhD students but also for the trainers. Indeed, being around peers from different countries allowed them to challenge their perspectives and learn from one another.

A trainer stated “It was very practical and well structured, addressing many important topics that sometimes we give for granted, while are not always very well known. In particular, I find it very important to make the candidates reflect on the possibilities outside the academia, giving them the opportunity to know the employers’ language and to learn how to better present themselves (in particular the workshops on day 3 were very interesting)”.

Both the trainers and the PhD candidates/post-docs enjoyed the international dimension of the group. Some said “I really enjoyed the event in general. It gave me a lot of motivation for my PhD project. But in addition to that, I really liked the whole atmosphere and the possibility to exchange with other people from different countries”, while others stressed that “it was an incredible opportunity to interact with other PhD students coming from different countries and different backgrounds and share our experiences”.

Overall, we can say that the participants were really happy with the event, an enthusiasm the Lyon Arqus team also shares!