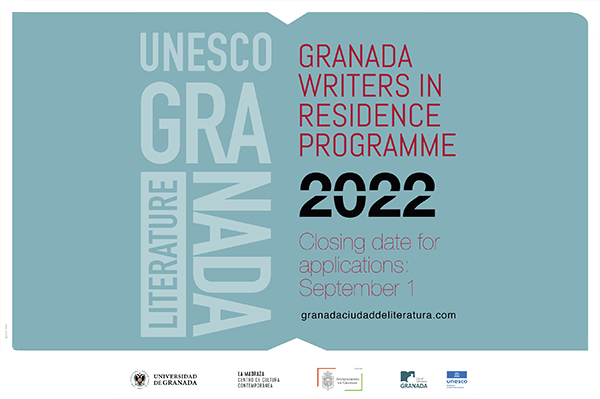 Granada UNESCO City of Literature, in partnership with the University of Granada, is launching a new international Granada Writers in Residence Programme. The purpose of this programme is to strengthen international partnerships in the arts sector in general and in the field of writing in particular, which is one of the main objectives set by the city of Granada as a member of the UNESCO Creative Cities Network (UCCN).

Granada UNESCO City of Literature and the University of Granada are setting up this programme to foster contacts and forge bonds between writers from Granada and those from other cities and countries all over the world, to extend the international reach of Granada-based writers, to build international awareness of the cultural fabric of the city of Granada, and to promote Granada as a city of the arts that welcomes talent from abroad with open arms.

Who is the programme for?

The Granada Writers in Residence Programme is targeted at writers residing in any country in whichever language they write.

What are we offering?

A month’s stay (30 nights) in Granada for two writers, between November 3 and December 2, 2022, at the Corrala de Santiago of the University of Granada.

Granada UNESCO City of Literature will cover the travelling expenses of each of the writers selected.

The University of Granada will arrange and cover the costs of accommodation for the two writers. Each will have their own room with full board at the university’s hall of residence for visitors (Corrala de Santiago).

Granada UNESCO City of Literature and the University of Granada will provide the writers in residence with opportunities to participate in the city’s literary life, arranging contacts with local writers, involvement in workshops, teaching activities, and so on.

What do we expect in return?

The writers in residence will undertake to participate in public activities related to the local literary system, as proposed by the programme’s organisers, as well as will devote the time of the residency to carry out their literary project, and agree not to get involved in other public activities with other institutions or in other cities without prior notification to those responsible for the Programme. Likewise, they will commit themselves to publicly disseminating (on social networks, etc.) their stay as international writers-in-residence in Granada.

Selection criteria and other details may be found on the website of the programme.

The University of Granada participates in this programme through its University Extension Unit, International Development Unit, and Social Responsibility, Equality and Inclusion Unit).