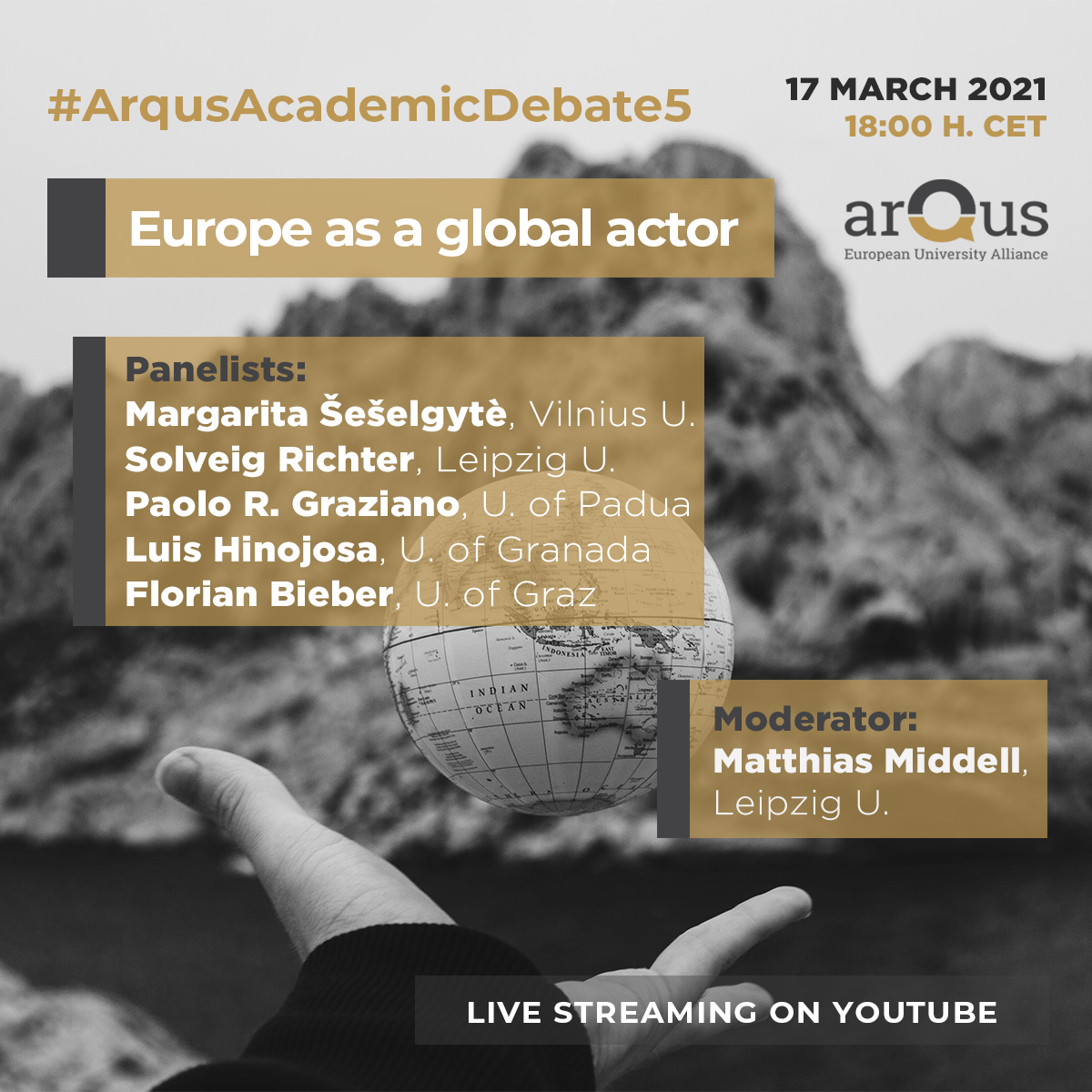 On Wednesday 17th March at 18:00 CET, Arqus holds the fifth Arqus Academic Debate. This time, the focus will be globalisation and the role of Europe.

Europe is involved in a wide range of global interactions and competitions. For a long time, however, it has relied on its integration into the blocs of the Cold War and later into the continuation of the Atlantic Alliance. This is not only less and less adequate but is also perceived as increasingly unsatisfying. This raises the problem of answering the question – both in individual European societies and at the EU level – of how one envisions the future European strategy in relation to global challenges? What concrete steps need to be taken to achieve this? This general problem can be played through on various objects (from the environment to pandemic, from copyright to international law, from foreign trade to knowledge society, etc.).

In this debate, experts from different Arqus universities and fields of expertise will focus on how Europe acts internationally and how it reacts to what is perceived as a substantial crisis full of challenges: Brexit, climate change, pandemic, etc. The panelists, from very different perspectives, will discuss questions about (1) what they think about Europe’s quality as an actor in comparison to the member states; (2) how they interpret the European capacities to act according to its economic potential on the international stage and in comparison to competitors such as the US, China, Russia etc; (3) how they see Europe being prepared for challenges of a truly global character.

The debate will be broadcast live on the Arqus YouTube channel.

Dr Margarita Šešelgytė is the Director of the Institute of International Relations and Political Science, Vilnius University. Her main research interests include security and defence studies, strategic cultures, small states studies, European Union Security and Defence Policy, European Union Eastern Partnership Policy, regional security cooperation. Margarita Šešelgytė for several years was a Studies Director of the same Institute. She has also worked for Baltic Defence College (Tartu, Estonia), Lithuanian Military Academy, had several civil servant positions at the governmental institutions of the Republic of Lithuania. She has a PhD in Political Science from Vilnius University.

Professor Solveig Richter is a Heisenberg professor for International Relations and Transnational Politics at the University of Leipzig. Before that, Dr Richter was a junior professor for International Conflict Studies and Management at the Willy Brandt School of Public Policy at the University of Erfurt. Dr Solveig Richter research focuses on such topics as external democracy promotion, post-conflict peacebuilding, the role of international organizations, as well as the effectiveness of civil crisis and conflict management instruments.Dr. Richter is also a co-editor of the Journal of Peace and Conflict Research (ZeFKo) that is considered to be the most important journal in the field of peace and conflict research in German-speaking countries. (© Swen Reichold, Leipzig University)

Florian Bieber is a Professor of Southeast European History and Politics and Director of the Centre for Southeast European Studies at the University of Graz, Austria. He holds a Jean Monnet Chair in the Europeanisation of Southeastern Europe and is the coordinator of the Balkans in Europe Policy Advisory Group (BiEPAG). Recent publications include Debating Nationalism (Bloomsbury 2020) and The Rise of Authoritarianism in the Western Balkans (Palgrave 2019), Negotiating Unity and Diversity in the European Union (Palgrave 2021, with Roland Bieber). (© University of Graz)