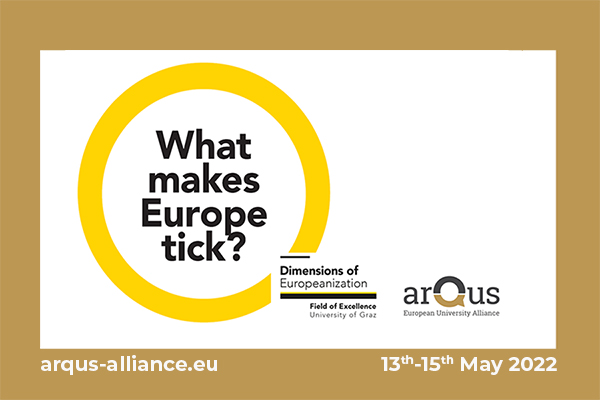 The University of Graz will host the next Arqus Research Focus Forum “Changing Societies – Dimensions of Europeanization” from 13th to 15th May. The Forum is organised by the Field of Excellence “Dimensions of Europeanization” of the University of Graz and the Center for Southeast European Studies (CSEES) in collaboration with the Arqus Alliance. The Forum will open with a special panel on the impact of the Ukrainian war on the future of Europe.

The Field of Excellence deals with social transformation processes in Southeastern Europe from a comparative perspective. Namely, the Forum “Dimensions of Europeanization” will explore changing discourses about the understanding, organization, and in particular, the unification of the material and figurative territory referred to as “Europe” in time and space. It builds on the long-established research expertise in South-eastern Europe at the University of Graz.

During the Forum, a wide range of paper proposals from different disciplines will be presented on the larger question of changing societies in Europe. In particular, the conference will address the following themes:

The event will offer time for internal networking to foster the exchange, establishment and development of sustainable contacts among the Arqus colleagues and other academics from Graz. For more information visit this website.

The Research Focus Forum will open with a special panel devoted to explore the future of Europe in the light of the Russian war against Ukraine on 13th May. The panellists invited will share their perspectives on what the war in Ukraine means for Europe and reflect on the different responses in Europe to the Russian aggression. Florian Bieber, director of the CSEES, will moderate the panel and address the panelists with specific questions:

The panel participants are:

This debate will also be available via livestream and recorded. For more information, visit this website.

The section of the news about the special opening of the Forum has been created by Gerhild Leljak (Communications Officer at the University of Graz).