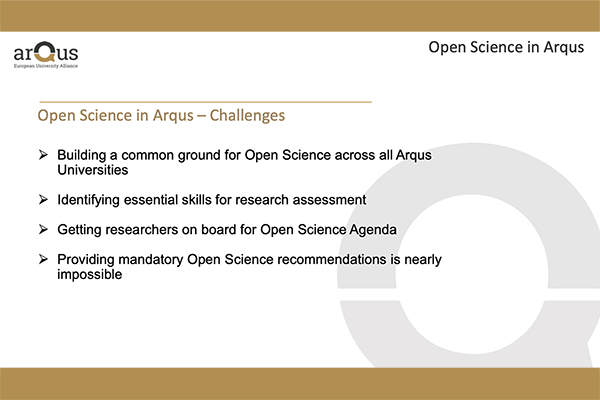 Arqus RI at the REA Cluster event “Institutional changes towards open science and societal engagement in research and innovation”.

On 1st July 2021, the Research Executive Agency (REA) of the European Commission organized a Cluster Event on how to achieve institutional changes so as to reinforce the relationship between research and society. On one hand, the question was how to facilitate the development of Open Science within universities, on the other how to integrate contributions of citizens into the creation of science and the setting of research priorities (Citizen Science).

The REA invited 24 projects funded by the SwafS (Science with and for Society) dimension of the H2020 funding programme of the EU to speak about their work, the barriers and enablers they encountered on the way, as well as their legacy, in the case of already finalized projects.

Arqus Research and Innovation (Arqus RI) was one of the projects invited to speak, specifically on the Open Science Agenda activities within the Arqus Alliance. Pia Voigt (Leipzig University, co-leader of WP5 – Open Science Agenda), was in charge of explaining to the other project members and to the EU officials what progress has been made so far to make Open Science (OS) a cross-cutting topic in all work packages of Arqus RI. The aim is to produce OS training materials, a set of recommendations to apply OS principles in university research assessment processes and the creation of a network of Open Science Ambassadors. These should be experienced practitioners of OS who can act as role models and advisors for researchers wishing to follow OS practices.

She mentioned that in this first phase of the project, the main challenge is finding a common ground on the concept and practices of Open Science between the seven Arqus universities, highlighting a concern mentioned also by several other speakers at the Cluster Event.

Other challenges shared by many participants were: lack of enthusiasm for change by senior management at universities, lacking reward for researchers practising Open Science, both in assessment and in recruiting practices and researchers fearing the loss of control over their Intellectual Property rights. In the area of Citizen Science (CS) a difficulty mentioned was that of finding the appropriate language to explain science to citizens in a correct and meaningful way.

Solutions at the European, national or institutional level were also proposed by the event participants, e.g. policy harmonisation of OS and CS at the European level, creating incentives for Open Science in assessment and recruitment systems, or the setting up of permanent structures for Open Science at universities. The creation of information points on Citizen Science and the involvement of public authorities are also currently being tested in several cities.

This event was a great opportunity for learning and networking among OS and CS proponents, and the Research Executive Agency will take home the messages of participants so as to improve EU policies and include the insights gained in upcoming calls of Horizon Europe.