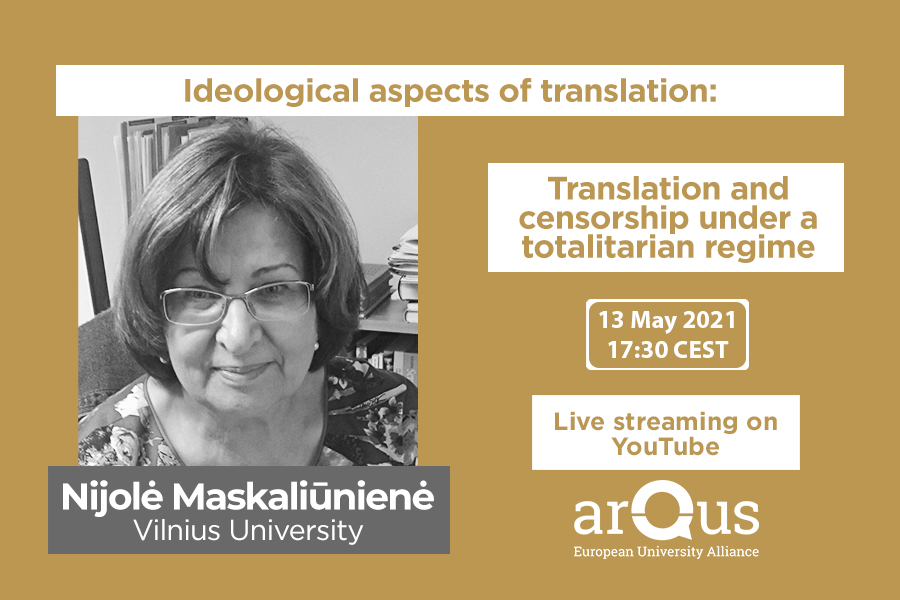 Webinar on translation and censorship under a totalitarian regime

On 13th May at 17.30 CEST, Arqus holds the webinar “Ideological aspects of translation: Translation and censorship under a totalitarian regime” by Nijolė Maskaliūnienė (Vilnius University). It will be broadcast live on the Arqus YouTube channel.

In this lecture, Nijolė will speak about a particular ideological manipulation in the form of state censorship, focusing on the situation in Soviet Lithuania (1940–1990). The Soviet ideological system was a typical totalitarian regime, thus the analysis of censorship can be further projected on any totalitarian regime that existed or may appear in the future. We are going to discuss the goals of the Soviet censorship and criteria according to which authors and their works were selected for or excluded from translation, i.e. we will speak about preventive and repressive censorship as well as consider the role of the translator as a censor (self-censorship). The different types of censorship, i.e. based on political, religious and moral motives, will be discussed through a number of examples from the translations by such authors as Ernest Hemingway, John Steinbeck, Harriet Beecher-Stowe, Daniel Defoe, Jack Kerouac and a few others.

Nijolė Maskaliūnienė is a Professor of Translation and Linguistics at Vilnius University with about 40 years of professional experience. She has headed the Department of Translation and Interpreting Studies for 16 years and is currently Director of the Institute for Literary, Cultural and Translation Studies. The professor has worked on several research projects dealing with issues of antonymy, converseness and translation, subtitling and language learning, the DGI funded project ORCIT (“On-line resources for conference interpreter training”) amongst others. Currently she is leading a research project “Translation and censorship under Soviet ideology”, funded by the Lithuanian Research Council. She is also Editor-in-Chief of the research journal Vertimo studijos/ Studies in Translation published by Vilnius University Press. Her research interests include ideological aspects of translation, translation and the category of oppositeness, lexicography and terminology, the translation profession, translator and interpreter training. She served as a member of the EMT Board (2010–2014) and is a member of several professional associations, including EST

The lecture will take place on Thursday 13th May at 17:30 CEST. It will be broadcast on the Arqus YouTube channel.

This activity is part of the Arqus Action Line 3, Student-centred Frameworks for Quality Learning. ​