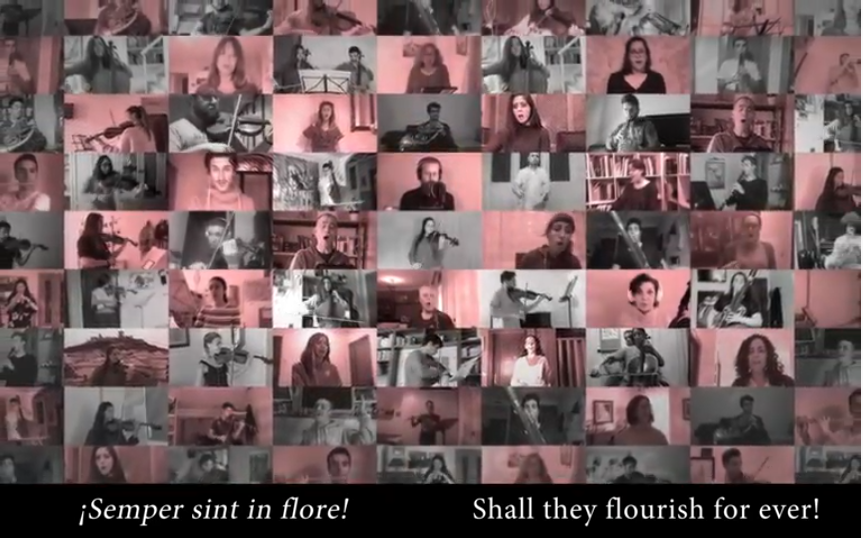 ​At the beginning of the confinement, the University of Granada “tele-gathered” 70 members of its Orchestra and Choir to record the Gaudeamus of Resistance with a verse dedicated to the current situation caused by COVID-19. Now it has been subtitled in 13 additional languages thanks to the support and solidarity of its international partners.

Arqus, 30th April, 2020. The Gaudeamus Igitur has been for centuries the anthem and a symbol of universities and their academic communities in a huge number of countries all over the world. Nevertheless, its nature has always been to be alive and its lyrics have never been static. In other words, some of its verses were conveniently adjusted and modified whenever it was deemed relevant to reflect changes and progress in society and in the academic world. When the pandemic started, the University of Granada brought together more than 70 members of its Orchestra and Choir to record an online version of the anthem that includes a dedicated verse of resistance against the SARS-CoV-2 virus causing the COVID-19 crisis. Jesús Luque Moreno, who is an honorary Emeritus Full Professor of Latin, proposed updating the anthem to fit the reality in which we currently find ourselves, and wrote the additional verse that inspires strength and hope, and emphasizes the certainty of victory over the coronavirus.

Almost 20,000 people from more than 15 countries have already viewed the original version, sung in Latin and subtitled in Spanish. Due to its success, the University of Granada decided to subtitle it in 13 additional languages so that people across the globe could enjoy and understand the strong and meaningful lyrics.

Subtitling the Gaudeamus anthem to 13 more languages, including all the languages of the Arqus Alliance, has been possible thanks to the voluntary contributions of academic and administrative staff of the University of Granada, and the collaboration of international partners, in particular, those that make up the Arqus Alliance. These efforts were promoted and coordinated by the University of Granada’s Vice-Rectorate for Internationalization.

As a result, the audio-visual version of the “confined” Gaudeamus Igitur has been subtitled in Arabic, Chinese, English, French, German, Hebrew, Italian, Japanese, Lithuanian, Norwegian, Portuguese, Russian and Turkish (as well as Spanish and Latin).

The new verse in this Gaudeamus of Resistance reads as follows: Virus coronarium nos nunc separavit, ¡Domi maneamus, domi studeamus! ¡Certe non triumphabit! [The coronavirus has torn us apart. Let us stay at home, and do our work from there! So it will not prevail!].

The author of the verse, Jesús Luque Moreno, highlights that the lyrics of the Gaudeamus anthem were born alive and have ever since remained alive. He states that the lyrics have always been open to the day-to-day experiences of academic communities and, in turn, to society. For that reason, the university cannot ignore a situation as difficult as the one we are now facing together.

Víctor Medina, the Vice-Rector for Outreach and Heritage, the area in charge of the Orchestra and Choir, explains that the reason why the lyrics of this version of the Gaudeamus have been translated into other languages is that the meaning behind the anthem, and not just the new verse, should be accessible to everyone. The Vice-Rector also points out that this anthem praises academic communities and institutions, and thus represents us, so we want it to be known.

The recording of the Gaudeamus has been possible thanks to the enthusiasm and dedication of 45 musicians who play string, wind and percussion instruments—some even recorded several instruments or voices—and 26 choristers. All of these musicians used their own resources at home to record each part separately, and then they were adjusted, edited, mastered and equalised by the Gueben production team. Approximately 75 parallel audio and video tracks have been used for the final video. It has been an unprecedented challenge both artistically and technically.

The Gaudeamus of Resistance and its international versions are, in summary, a collaborative work that overcomes borders and restrictions and makes use of the best we can offer. It shows that international cooperation can help to throw off chains and stand by each other.

The complete set of international versions is available on the University of Granada YouTube channel: http://sl.ugr.es/orchestravirus ​