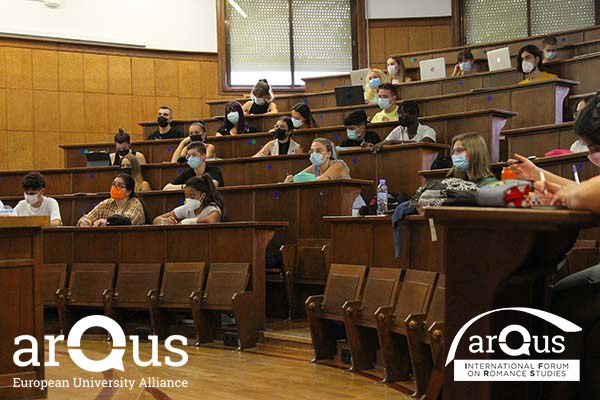 All in all, the seminar united up to 45 students from Graz and Granada in presence, respecting all necessary anti-Covid-measures, and showed, that even in these difficult times, quality university teaching on an international level is possible. 27 certificates of full attendance were issued by the Arqus Alliance. Classes were held in Spanish and Italian aiming at improving the inter-comprehension skills of the students. The seminar is an initiative of the recently founded “Arqus International Forum on Romance Studies”

During one week of an intense academic and cultural programme, the students (BA and MA level) experienced the many-faceted linguistic and literary intertwinement of Spanish, Italian and Portuguese from the early Middle Ages until the present day, tutored by eight renowned experts in their fields from the Universities of Graz, Granada, and Vilnius. Among other topics, classes on the Spanish influence on Neapolitan, on Arabisms and Hebraisms in Spanish, Portuguese and Italian, or on parallels between the Italian Commedia dell’Arte and Golden Age Spanish Theater were taught, accompanied by a rich and in-depth cultural programme on the history of the city of Granda, especially from a linguistic and literary point of view.

The combination of high-quality courses on linguistic and literary contacts and connections between the Romance languages of the Central and Western Mediterranean and a broad cultural programme proved to be a full success, as teachers and students alike found a great atmosphere to exchange, teach, and learn. Especially the many positive feedbacks from the students testify the high acceptance and appreciation of the seminar among the target group as well as the academic imprint the seminar left on the students.

The great success the seminar enjoyed opens up a bright future for this kind of event within the Arqus Alliance. A second seminar, this time dedicated to “Romance linguistics and the Romance languages in America and Africa”, is already scheduled for summer 2022 at the University of Graz. Finally, a third edition is planned to take place in Granada during the second half of 2023.