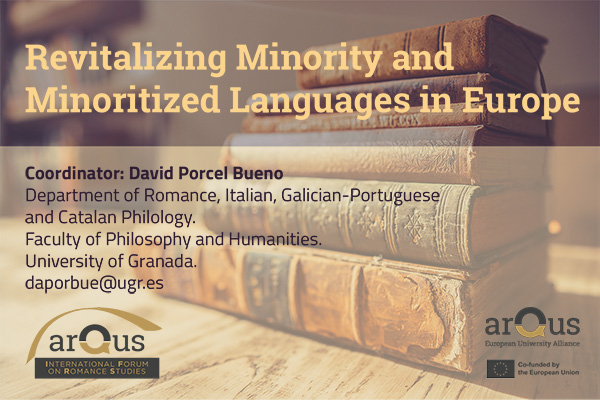 The Arqus International Forum on Romance Studies (AIFRS), the multilingual, interdisciplinary network for research and teaching on the Romance languages within the Arqus European University Alliance, launches the first edition of the series of conferences and workshops “Revitalizing Minority and Minoritized Languages in Europe” focused on plurilingualism and multiculturalism on the Iberia Peninsula from November 2022 to May 2023.

The AIFRS Granada team, led by several Professors from the Department of Romance, Italian, Galician-Portuguese and Catalan Philology, has organised this new initiative to study, teach and promote minority and minoritized languages, especially those that belong to the group of Romance languages (Galician, Sardinian, Judeo-Spanish, Franco-Provençal, Mirandese, etc.).

First edition on plurilingualism and multiculturalism on the Iberian Peninsula

The first edition of the series “Revitalizing Minority and Minoritized Languages in Europe” will focus on the Iberian Peninsula. It will include two conferences, one given by Carsten Sinner, from Leipzig University, “The impact of Galician on Argentinian Spanish” (May 2023) and another given by Rachele Fassanelli, from the University of Padua, “The representation of female character in the Cantigas de amigo of Don Denis” (November 2022), and two workshops, one given by Stefan Koch, from the University of Graz, “From Medieval to Modern Asturian and Leonese” (February 2023), and another given by David Porcel Bueno, from de University of Granada, “Mirandese, a minority and minoritized language in Portugal” (March 2023).

The organisation of this initiative has been possible thanks to the collaboration of the Xunta de Galicia and the Vice-Rectorate for Outreach and Heritage and the Faculty of Philosophy and Humanities of the University of Granada.

To participate in future editions of the series, please contact David Porcel Bueno at daporbue@ugr.es.